skip to main | skip to sidebar

Home is Not a Place - Proximity Mag, Readers Write

I wrote this short essay on home for a writing blog started by several of my fellow Goucher College graduate students.  Go to their website to check it out:
Home is Not a Place, Proximity Mag, Readers Write Section 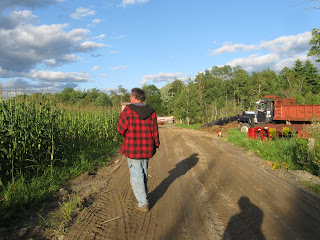 stealing from someone else's blog but worth sharing....

stealing from some else's blog y'all...but worth sharing
Posted by c. at 6:43 PM No comments:

Okay, so I just moved back to Bah-ston, and am currently residing on the South Shore, freelancing for a couple of local dailies, and covering this town, where some dudes, apparently, just don't abide....

Police arrested a pair of rowdy, beer-swigging men after they were kicked out of Good Time Emporium in Somerville and refused to leave Friday night, June
27.

It all started when Michael Vaughan, 24, of Hanson, allegedly took his Bud Light beer with him when he went to smoke a cigarette on the outdoor patio of the bar at 11:05 p.m.

When bar staff told him alcohol was not allowed outside, the apparently intoxicated Vaughan said, “Dude, get real. I’ll do what I want,” according to police reports.

When Officer James Slattery and Sgt. John Vozella, who were working paid details at Good Time Emporium, warned Vaughan he would be arrested if he didn’t leave, Vaughan replied, “Dude, are you for real?"

Apparently, the cop was.

On the way to the police station, police said, Vaughan continued to make irrational statements, saying, “You don’t know what I am going to do to you” and “I’m from Pembroke, Massachusetts.”

Sounds like that's one dude who has been smoking too much of the real Dude's shit.

Why Slate.com is the best storytelling venue there is....